5 Card Draw is one of the oldest poker variations that used to be very popular before Hold’em took over. As the name suggests, it is a draw game, meaning there are no community cards and rules are somewhat different from games such as Texas Hold’em and Omaha.

Although the game has lost a lot of its popularity, you’ll still find it available online at many poker rooms. If you’re looking to learn how to play 5 card draw poker and expand your repertoire of games, you’ve come to the right place as we’ll have you ready to play your first hand in under five minutes, guaranteed. 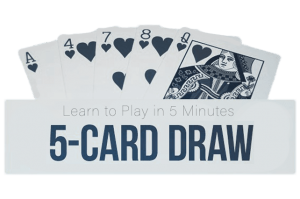 Like most other variations, the game is played using a standard deck of 52 cards. Sometimes, the short deck is used as well with only 32 cards, but this is a different game altogether, and it requires different 5 Card Draw poker strategy. For this article, we’ll focus on the main variation played with the full deck.

In terms of betting structure, the game uses the setup quite similar to that of Pot-Limit Hold’em, with blinds and occasional antes and the maximum bet limited to the size of the pot. Sometimes, there are also No Limit and Fixed Limit 5 Card Draw games, but this doesn’t affect the main rules, and the gameplay stays similar for the most part.

At the start of a hand, one player is designated as the button (the dealer), with the two players left to them posting a small and the big blind. The first player to the left will post the small blind (SB) while the one next to him posts the big blind (BB), which is usually two times the size of the SB.

The player seated in the small blind will receive the first card face down, and the deal will continue clockwise until all players have received one card each. Then, the second round of dealing begins, with all players receiving the second card, then third, until everyone has five cards in front of them. All cards are dealt face down so that only the player knows what they have, and no one has any information about other players’ holdings.

Once all players have their cards, the action begins with the first player left to the big blind. They can fold, giving up their involvement in the pot, call, matching the big blind amount, or raise up to the amount of the pot. Once the first player is done, the action will move to the next player in line, moving to the left. The next player can call fold or call the bet in front of them or bet or raise themselves. The maximum size of the raise is usually the pot, but in no-limit games, there will be no cap.

Once the first round of betting is over, all still active players (those who haven’t folded) will get a chance to draw new cards. What this means is that you’ll be able to exchange between one and all five cards and receive new ones from the deck. Players will request new cards in turn, starting with the SB or the first active player to the left of the SB.

Once everyone has exchanged the cards and received the new ones, another round of betting ensues. This time, the action will start with the small blind or the first still-active player to the left. They can check or bet. Then the action continues as normal, with players having standard options when the action gets to them (check, fold, bet, and raise).

After the final round of betting, if there are two or more still active players in the hand, they will proceed to the showdown. At this stage, they will turn over their hands, and the winner will be determined by who has the best hand according to standard hand rankings for high poker variations. You’ll probably be familiar with these if you’d played poker before. 5 Card Draw poker hands range from just a high card all the way up to the Royal Flush.

If two or more players have the exact same winning hand, they’ll split the pot equally. If they have the same hand, but different side cards (kickers), the player with the highest kicker card will win the entire pot. It is also important to mention that suits don’t play any role in determining the winner, i.e. a flush in hearts is just as strong as flush in spades (all other things being equal).

Unlike Hold’em and other games with community cards, 5 Card Draw is a game of very limited information. You won’t know much about what your opponents are likely to have because you won’t have too much to go on. Still, there are some 5 Card Draw poker tips that are likely to help you win more often and get out of the way when you’re likely to be behind.

First and foremost, you need to be careful when selecting 5 Card Draw poker hands to start with. Hands that have no real potential are best left alone. Try to get involved only when you’re dealt a decent pair (Eights or better) or a good draw (four to a straight or four to a flush). Chasing draws that need two cards to complete is usually not a profitable way to play.

Pay attention during the draw round and see how many cards your opponents are discarding. This can give you some info. For example, someone exchanging three cards couldn’t have a better hand than a single pair, so you at least know where to put them at that point. You still won’t know what cards they drew, but you’ll have something to go on.

Try to figure out the style of play of other players at the table. There will often be someone who just loves bluffing too much, and you should be looking to get involved in the pots with this player. You won’t need that strong of a hand to beat them as they’ll often showdown very weak holdings and will try to win pots by pure aggression and often standing pat with poor holdings to try and deceive you into believing they have the goods.

Like in all poker variations, the position is very important. As you get closer to the button, you can expand the range of hands you play. Some hands that aren’t playable in early positions become viable candidates on the button or cutoff. You’ll also be able to pull more bluffs when playing in position, so you’ll definitely want to play as many hands as you can close to the button.

Overall, though, you should try and play a solid, fundamentally healthy poker. Try and build big pots when you have big hands and try to avoid massive bluffs unless you really have a reason to go for it. In most games, this fundamentally healthy approach will be more than enough to beat the competition. Big bluffs, while cool to show, aren’t necessarily very profitable, so if your goal is to make money, try to use them sparingly.

You won’t find many great resources on how to play 5 Card Draw poker online these days. The game is simply not that popular anymore, which means there aren’t many people interested in creating strategy guides for it. So, to learn to play well, you’ll have to do a lot of work on your own and really learn from the experience.

This may feel like a daunting proposition at first, but keep in mind that your opponents are in the same boat. They don’t have access to solid resources, either, so if you’re willing to put in the work and enjoy playing the game, you’re very likely to do well in your sessions.

Some of the 5 Card Draw poker tips in this article should give you a good starting point. While they won’t immediately make you the master of the game, they will ensure you don’t make some big mistakes that new players are prone to. As time goes by and you get more hands under your belt, you’ll certainly start to see the results and develop your own strategies. Once you get to the point where you start understanding what your opponents are trying to do and how to counter this, you’ll be well on your way to becoming a very good 5 Card Draw player.