Texas Hold’em poker has been around for a while; however, it wasn’t until a few decades ago that it became the most popular form of the game. It was in the early 2000s when hold’em became the main poker variation around, taking the throne away from previously popular variants such as seven-card stud.

The game owes a lot of its popularity to the fact it’s always been the game of choice of the WSOP main event. With the rise of televised poker, hold’em has caught the eye of the viewers, and people started to learn so they too could compete in the main events, as well as in other major tournaments around the globe such as WPT, EPT, and more.

Texas Hold’em Rules in a Nutshell 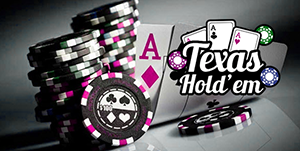 One of the reasons the game has garnered so much popularity resides with the fact it is easy to learn. Moreover, it’s often been said that hold’em is a game that takes five minutes to learn and a lifetime to master, and this still rings true today. As far as basic poker, Texas Hold’em rules are concerned, they are really easy to learn.

The game is played with the standard deck of 52 cards without jokers. It utilizes the usual setup for hand values used in other high poker variations, starting with the high card and going all the way up to the royal flush. In between, there are hands such as a pair, two pair, trips, straight, flush, full boat (full house), quads, and straight flush.

Once all the cards have been dealt, the action will begin with the first player to the left of the BB. This position is often called under the gun (UTG). The player has the option to fold their cards (giving up without putting any money into the pot), call (matching the big blind amount), or raise to any amount of their liking, with the minimum being two times the big blind.

The action then continues with the next player seated to the UTG and goes around the table. All the players have the option to fold, call the bet in front of them, or raise to any amount they like up to the total amount of chips they have in front of them. This is why the game is called no limit.

Once this initial round is over, the first three community cards are dealt across the middle of the table. These cards are spread faceup, and all the players can combine them with one, both, or none of their cards to make the best possible hands. All combinations are allowed.

The next player in line can check if there is no action in front of them, call the bet in front of them, raise the said bet, or bet themselves if checked to. Of course, every player can, at any time, decide to fold when it’s their turn to act, giving up on their participation in the hand and losing any money they’ve already invested into the pot.

Awarding the Pot: The Showdown

One of the reasons the game has garnered so much popularity resides with the fact it is easy to learn. Moreover, it’s often been said that hold’em is a game that takes five minutes to learn and a lifetime to master, and this still rings true today. As far as basic poker, Texas Hold’em rules are concerned, they are really easy to learn.

The game is played with the standard deck of 52 cards without jokers. It utilizes the usual setup for hand values used in other high poker variations, starting with the high card and going all the way up to the royal flush. In between, there are hands such as a pair, two pair, trips, straight, flush, full boat (full house), quads, and straight flush.

Texas Hold’em is played in several main variations. The most popular one is, of course, no limit, where everyone is allowed to wager all their chips at any moment without any limitations. However, there are two more variants you’ll encounter online and in live casinos, namely,

Apart from these variations that mostly differ because of betting rules, there are also three main subtypes of hold’em games that are played in all these three, namely,

As the name suggests, cash games or ring games are played for actual cash. In these games, the value of the chips equals monetary value, and players can, at any time, stand, take their chips, and exchange them for cash. 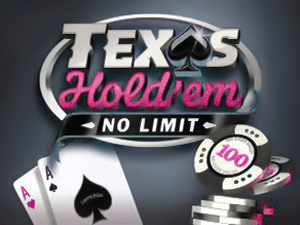 As mentioned, cash games can be played in any of the three formats—limit, no limit, or pot limit. No-limit games are the most popular; however, limit and pot-limit games are available as well both online and in live venues. It is the matter of preference for the most part, and fixed-limit games used to be much more popular a couple of decades ago.

Games also differ according to the maximum number of players at the table. There are three main types of ring games you’ll find online, and knowing what these are can help you find your way around:

Players who enjoy fast-paced action and don’t like hanging around and waiting for the next hand to be dealt can also find many different variations of “fast fold” hold’em cash games. These have different names on different rooms, such as Zoom Poker or Speed Poker. While names may differ, the main idea remains the same. Various poker tools have become an integral part of the game.

With these games, you can fold your hand “out of turn”; that is, you can decide you won’t be playing the hand as soon as you see the hole cards. Other players won’t have this information until the action gets to you; however, you will be immediately moved to the next table and dealt a new hand so that you don’t have to wait around doing nothing.

Tournaments are probably the most popular Texas Hold’em poker game format, and they are the main culprit for the game achieving the fame that it has. Unlike cash games, where every chip is worth its exact monetary value, tournament chips have no value outside the event. Rather, they are used as a tool to determine the placement in the tournament.

The way it works is that all players in the tournament are given the exact same number of chips. The tournament will begin with certain blinds, and these will usually increase in regular time intervals. Players will play poker as always; however, once they lose all their chips, they’ll be out of the tournament (unlike cash games, where you can always reload). This requires a different Texas Hold’em poker strategy.

To participate in the tournament, all players will pay a certain amount. These amounts are added into the prize pool, which is shared by a certain percentage of players finishing in top positions. Therefore, the goal in the WSOP tournaments is to first survive long enough to make the payday and then go as far as you can to win more money. Of course, the winner of the tournament is usually the one taking home the lion’s share of the prize pool.

To add some spice, tournament organizers have come up with different ideas over the years. Thus, today you’ll find different types of hold’em tournaments on top of the traditional freezeout ones described above as shown below:

Sit and Go’s are tournaments in small. They adhere to all the rules for the tournaments; however, they’re usually capped in terms of entry, and the event will start when that number of entries is reached. There are single-table Sit and Go’s, featuring 2, 6, or 9 players, and multi-table ones, where the number of players can be 18, 27, 45, 180, or even more.

Finally, Spin and Go (and other similar formats of a different name) is a special type of Sit and Go’s where players have a shot at winning a big jackpot prize. Unlike regular tournaments, the prize for the winner is determined randomly here, and it can be smaller than it would be in the usual Sit and Go with the same number of players, or it can also be several thousand times the buy-in amount.

Conclusion: Have Fun with Cadillac of Poker

Texas Hold’em is by far the most popular variation of the game you’ll find today. Played in the cash game and tournament format, this is the game you need to know if you’re looking to build your poker career or even just have some fun with friends.

Hopefully, this guide has provided you with enough information to get started. There are many more things you could and should learn about hold’em; however, these will come later. For now, you can try the game to see how you like it. Once you’re ready for the next step, there are many great resources and Texas Hold’em poker tips to help you along the way.